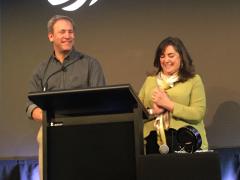 Comfort Zones…we all have them. Yet one person’s comfort zone can be significantly different than another’s. These days sending a rocket into orbit seems old hat. Its been done many times before. Sure it takes effort and energy, planning and expense but we have become accustomed to its happening. But in 1957, the first rocket sent into space to launch Sputnik was momentous. The first landing on the moon, spine tingling. We all know that kind of personal and professional momentous occasions because their planning and execution are this blend of fear, (sometimes terror), anxiety, excitement and full of possibility. Within this stewpot of emotions, vitality thrives. So I wanted to share a personal take on this state of being.

I am continually surprised and touched when we travel internationally and even nationally and people tell us that they have observed, admired, learned from or been inspired by us and we have never even met. Sometimes I feel as if they hold me up on some type of pedestal. I should not be put there…

For years, I would be intimidated at our workshops as psychologists, psychiatrists, professors and physicians introduced themselves. That is now old hat for me like those early rockets. For no matter how many letters they have after their name, they are just individuals looking to learn about tapping with a curiosity and desire to become skillful in this wonderful process of healing.

It was only 2 years ago that I would demonstrate a tapping technique with a student in front of a workshop that I would walk away without the armpit cloth of my shirt not being soaked and pungent! Alina would smile knowingly and just keep it to myself. A dozen of those later the nervous sweat just seemed to disappear.

I have become very comfortable with teaching a class, be it online or in person. I really love it. Interviews have also become quite effortless (not that I don’t try to jam in some extra prep time in the hour immediately preceding the interview at times). I know to observers it can look incredibly easy and relaxed. That’s only because they have not seen behind the scenes and before it was that way.

This past week however for me was like a Mars launch, an experience requiring a whole new set of booster rockets that once again brought me to my knees of feeling incompetent, under-prepared and as nervous as Dorothy approaching the great and mighty Oz (interested turn of the phrase there 🙂 This past week Alina and I were blessed to by keynote presenters at the Mind Heart Connect Conference in Queensland, Australia. Our fellow keynotes are luminaries in our field who have presented to audiences far greater than the 350 or so attendees that filled the hall. I had not noticed until the day of the event that we were the final presenters of the day…this was not good, nope not good at all.

A powerful ritual with a local representing the local are aborigines offered the most spectacular of didgeridoo notes. Each presentation surpassed the prior. Peta Stapleton rocked the house with a visually stunning presentation and exciting EFT research news. David Hamilton delivered a pants-wetting, rib-splitting, heartfelt talk on kindness. Lori Leyden showed soul-connected film footage of the work the foundation is doing with the indigenous communities in northern Australia to heal the generations of trauma…and it just kept getting better. Dr Joe Dispenza, a personal inspiration (and I feel blessed to say friend) proceeded to induce a response in me that made me feel like a 3rd grader in my now ever-growing keynote comparison meter). By lunch time I could barely concentrate, pulling Alina out to a private room for some tapping and more rehearsal. All I can remember of the post lunch keynotes included Tom Cronin’s film trailer, The Stillness Project about aiming to have 1 billion people meditating and up-leveling global consciousness, that’s all. Carol Look regaled us with EFT stories filled with uproarious family dysfunction like a tapping preacher delivering a fine-tuned sermon…Clearly I had gotten myself in way over my head, inviting me to be on that stage of illustrious keynoters had been a clear overestimation of my skills.

And then it was 5:15, time to put on the lavalier microphones and time to walk up to the front of a stage looking out at the largest audience I have ever addressed, flanked by two monstrous screens that felt like World Series Jumbotron displays.

A pause for a moment in the story. I have a memory flash that I will never forget. I remember a moment, a break between the presentations when music was playing and Alina told me to look into her eyes and dance with her. I remember feeling incredibly shy, not about anyone watching us dancing but of a heightened vulnerability of her seeing my nervousness. This was where I felt I should be the sturdy one. I felt more like a bowl of Jello than a piece of granite in that moment, clearly she was stepping up when I most needed it. That kind of support I have rarely known or felt and it allowed me to feel like maybe it would not be a disaster.

I barely remember our introduction or how we started. But I do remember a moment about 20 minutes in when we had the audience sharing with the person seated next to them. The voices filled the room and there was a bubble of silence between Alina and myself when we both smiled at each other and maybe it was in my head or maybe it was allowed and hopefully not picked up by our microphones something to the effect of We’re doing this thing and its really going ok! The part that made it most possible is that it was about using EFT for Healing Relationships based upon our Learning to Find Love course. That, we know in a way that cannot be faked or inauthentic and in that knowing, in the being of that, the shelter and trust of that, we successfully put the capstone on an amazing day.

So, why do I share that story? Because I think many people look to us as teachers, as trainers, as a couple and they may experience a sense of their own comparison, finding themselves lacking and spending far too much time in self-judgment and self-criticism. We, I am no different than you. So I share this now, as perhaps many who were in the audience witnessed nothing other than an uplifting presentation, having no idea what lie behind the curtain.

May you continue to find ever-expanding constellations to stretch yourself into exploring. My you too be presented with opportunities to expose your own vulnerability and courage. When they show up for you, expect fear but don’t let it drown out the excitement and if it does, TAP ON IT! I recommend then saying YES anyway.

By Craig Weiner, C0-Director with Alina Frank of the EFT Tapping Training Institute