Trauma’s Trans-Generational Epigenetic Legacy; How Father’s Pass On Their Pain 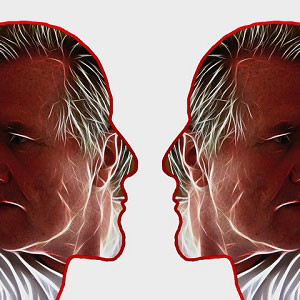 In this article I will discuss two relevant and recent research papers, both dealing with unfolding understanding that is emerging in this field of Epigenetics.

Most of us have a rudimentary understanding of genetics, the science of how we pass traits down to our children through a gene blueprint, comprised of chromosomes, made of DNA in a double helix, etc. Most folks however may not have learned in science class about the term epigenetics. Why? The field was nearly non-existent until 1o years ago or so. In the term epigenetics, epi- refers to “over” or “on top of” genetics. That means that there are non-chromosomal structures and parts that are external to a person’s DNA (anything that is not part a chromosome) can be affected by external or environmental influences. Dietary nutrients is one example. Toxic exposures another. However, our cells are also bathed in our bodies internally manufactured substances, like hormones and neurotransmitters (our body’s natural chemical information carrying substances). We are only just beginning to understand which of these “chemicals” can affect, change or modify our DNA “switches” which turn our genes on or off. The inherent structure of DNA does not get altered, it’s just that the mechanism by which DNA and RNA produces the proteins of nearly every cell function in our body, either goes into production or not. One mechanism that we know of is when a kind of chemical lid gets put on a DNA molecule (methylation), making it impossible for its code to be read and replicated.

OK, so, what did this research teach us about why this is relevant? Get ready, because this may just radically transform your understanding of why how you take care of your body is about to expand exponentially. A recent research paper explored how life experiences, specifically stressful or traumatic ones, may be able to be passed down to the next generation, and even beyond. The evidence demonstrated that there is a biological mechanism by which living through experiences such as war, violence, extreme hunger, the stress of poverty, the intense grief of loss, etc., could potentially leave a lasting imprint on our genetic code which is then passed down to our children, having a trans-generational affect, impacting a lineage well beyond our direct offspring.

This study showed that the effects of stressful events on mice altered a type of their RNA (the functional part of DNA that makes the proteins of, in essence, who we are, that made their mouse children and grandchildren signifactnly more prone to symptoms of depression-like behaviors and even increased risk of psychological disorders like Bipolar Disorder. (Remember that the DNA of those little mice are approximately 97.5% identical as human DNA!). By implication then, the biochemical changes that our bodies go through when exposed to severe stress, may epigenetically alter us sufficiently, that we could be passing its effects down to our children, if this same process happens in humans.

An interesting feature of this story has to do with the gender of the mice studied. Somehow I think it is easier for us to comprehend that the stress to a mother, that carries a child, can have an impact on a child, but this research only looked at the process in the mouse fathers!
This study, recently released in the journal, Neuropsychopharmacology Review, offers serious evidence that emotional and psychological stress induced by traumatic events may becan be carried forward for generations. Researchers found that mice who underwent traumatic stress early in life, appeared to carry forward the effects of such trauma to their children and grand-children through their sperm. This increased the likelihood of passing on behavioral and mental health conditions such as Bipolar Disorder. This work validates the epigenetic hypotheses of Bruce Lipton and many others that look to the influence of environmental and emotional factors that play a significant role in influencing the expression of our genes, especially in the arena of mental and emotional health. Epigenetic environmental factors can have both positive and negative influences. This particular study reviews the possibility and implications of traumatic stress on brain function and looks specifically at how male sperm play a role in this process of information carrying.

For those wanting to understand the mechanism studied, authors Johannes Bohacek and Isabelle M Mansuy at the Brain Research Institute at the University of Zurich and ETH Zurich studied the microRNA of traumatized and non-traumatized mice and noted the resultant variations in the over and under production of various microRNAs that altered many cell processes that manifested in altered mice behavior that mimicked symptoms of isolation and depression.

Exploring our own healing process from traumatic stress now has greater evidence as having a deleterious affect not only on ourselves and those who are affected by us, but in addition, the possibility of effecting many generations forward. Fields of study like Energy Psychology (including EFT), Family Constellation Work and perhaps any trauma-healing modality, now have a substantial research paper that supports the long-lasting potential effect of efforts in affecting and healing multi-generational trauma.

To quote this study’s authors, “This concept has immense implications for the understanding of biological functions and disease etiology… Examples of epigenetic inheritance relevant to human disease, such as the detrimental effects of traumatic stress or drug/toxic exposure on brain functions, are reviewed.”

This research paper offers a wealth of published research that substantiates how outside environmental events can permanently imprint the information carrying genome and affect the programming of a body’s response to future events.

Directly relevant to EFT is a study currently being completed by Church et al, that studied veterans diagnosed with PTSD that used EFT as an intervention and studied the epigenetic effects of 50 “upstream” regulatory genes that affect “downstream” gene expression that involve processes such as immunity, longevity, inflammation and cancer induction. The lab analysis and calculations are in process utilizing the labs at the Institute of Noetic Sciences (IONS). The results are eagerly awaited to see if there is objective evidence of EFT Tapping having epigenetic influences.

Another recent study release April 29, 2014 demonstrates a unique exploration of how dramatically different seasonal diets in Gambia resulted in demonstrating how a mother’s diet, prior to being pregnant, affected the silencing of her child’s genes.

As Science Daily reports, “A unique ‘experiment of nature’ that took place in The Gambia has now revealed that a mother’s diet before she conceives has a permanent effect on her offspring’s genetics. This is the first time the effect has been seen in humans, and is regarded as a major contribution to the field of ‘epigenetics.’ This observational study opens up the possibility that a mother’s diet before pregnancy could permanently affect many aspects of her children’s lifelong health. “Our results represent the first demonstration in humans that a mother’s nutritional well-being at the time of conception can change how her child’s genes will be interpreted, with a life-long impact.”

So, what are we learning with this emerging scientific research? What we do, what we think, what we feel, what we eat…the choices we make, are not solitary, it affects others. I have had several people comment on my article saying that it supports the biblical concept that the sins of the fathers are passed on to the second and third generations forward. That I have no idea about and won’t personally comment upon, but the concept of inter-connectedness, that nothing happens in isolation, for me is reinforced by this ongoing field of study.