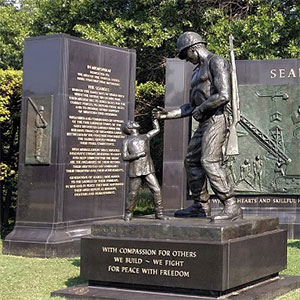 Eighty-two year young Arnie L. thought he was attending the EFT Universe tapping trainings to learn a tool to assist his 12-step program sponsorees. Little did he know he’d be transformed in the process by releasing 50 years of held war trauma and guilt.

Arnie had learned about EFT through the manual that a relative had sent him and was intrigued enough to attend the 1st Washington Tappers Gathering. The experiences he had during the Gathering were powerful enough to convince him that there was something to this tapping business and he eagerly signed up for the trainings in Seattle the following weekend.

The first day of level 1 in EFTU trainings we teach the Movie Technique. In this process we slowly release painful events, one crescendo at a time, all the while looking for other aspects. This technique demonstrates just how easy and painless EFT can be when releasing old traumas. As I discussed the different points of the process, Arnie had a comment and without a moment’s hesitation began to tell us all about one of the worst days of his life as a young sergeant in the Korean War. Fortunately, I had already told the students what they needed to do for their own self care if something disturbing should trigger them during the workshop. Because of the graphic nature of Arnie’s tale, everyone had begun tapping on themselves silently. I asked Arnie to pause and after confirming that my emotional assistant would continue to scan the room in case someone else needed help with emotional intensity, I asked Arnie if he would volunteer to demonstrate the technique in front of the group.

We began tapping on the title that Arnie assigned his “movie” to bring down some of the intensity. He then proceeded to share the events of that day – his first day on the ground in Korea. Even though I had given him clear instructions to pause at any point in the story where he felt emotions rising in intensity, Arnie was so dissociated that I often had to ask him to stop and double-check that what he had just said wasn’t charged. More often than not it was. He had told his story so often that on a conscious level he didn’t think he had any emotional intensity around many of the scenes including disturbing images of charred bodies, but he did indeed. Each time I got confirmation that his body was feeling any intensity we would tap it away to a zero. With each aspect, bit by bit, Arnie’s whole body, most noticeably his face, would relax more and more. After all the peaks were cleared, Arnie was able to tell us all about the events of the first half of the day including pieces he had never previously recalled. Arnie told us that the next part of that day in Korea was still unresolved but agreed to work on it later.

Signs of Resolving Past Trauma

Over the course of the week between levels 1 and 2, Arnie reported that he felt lighter, that he’d been able to listen to Big Band music without sadness for the first time in 50 years, and that he could smell cooked meat without the disgust he normally felt in his body. All of these bothersome issues had just disappeared as a result of the work he had done during the workshop or as a side-benefit of that work.

Returning the next weekend for level 2, Arnie was ready to work on the events that happened on the second half of that day in Korea. The beliefs Arnie had created around this had been constantly with him and he made reference to the tremendous overwhelming guilt he had been carrying since then.

The first module in EFTU level 2 training is a review of the level 1 fundamentals. As soon as I asked the students to describe the Movie Technique my eyes met Arnie’s and I knew then that he was ready to work through part 2 with me. After I carefully warned the others in attendance about the graphic nature of the scenes, Arnie began describing the 1st half of the day with a new sense of peace and understanding. This was perfect confirmation that the work we had done the previous week had held. I then asked Arnie to pause and give the second half of the day a movie title. He named the movie, “John Wayne Could’ve Saved Those Men”. The title alone was a 10 in intensity and we worked for a few minutes on getting it down to a 2 before proceeding. He then began his story and was much more able to sense when there was a charged part of the story. Again we would pause and tap and move on once the peak subsided. The whole process lasted about 20 minutes from start to finish.

One of the beautiful aspects of EFT is that once you have released pain, guilt, anger, sadness, etc from your energy system, you often have new insights and the return of import pieces of the story that help to bring resolution about past events. Arnie told us that he now recalled that he’d been told that the men he was instructed to save that day were already dead. He also was able to comprehend that it would have been impossible for him to have saved them, and that to have attempted to go further than he had, would have meant suicide and perhaps loss of other lives. All of this had been suppressed under his blinding guilt.

My work on the Stress Project where I volunteer my time to work with war veterans has been some of the most inspiring work I have ever done. This is a beautiful example that shows why I teach and practice EFT as a method for helping people transform their lives.
That a person like Arnie can hold intense life-altering memories for over 50 years and can be healed within a span of 40 minutes, serves to remind me that everyone on the planet today should be learning and using EFT.

Alina Frank, is among the top ranked EFT practitioners in the world according to independent review sites. She has published articles in international and domestic publications and has been interviewed on various shows on the topic of healing.  For a free 15 min consultation please visit her site at https://www.tapyourpower.net