Where Do We Feel Happiness, Anger and Love; New Body Emotions Map 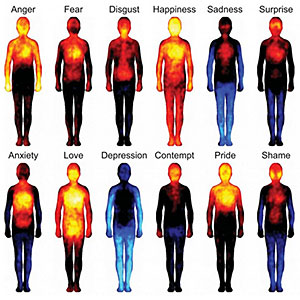 In the Dec. 30, 2013 Discover Magazine Blog, author Gemma Terlach reports on a new study published today in the Proceedings of the National Academy of Sciences. that studied over 700 individuals from Sweden, Taiwan and Finland, looking to explore where emotions registered and were felt in their bodies. The researchers had the participants map the physical correlates of a wide range of emotions to see if they could find consistent “body mapping” similarities. In other words, did people consistently feel anxiety in their belly, or grief in their “hearts”? That is exactly what they found, irregardless of cultural and national differences. While this may be something most people know intuitively, this is the first comprehensive study to validate this notion.

Participants were exposed to stories, words, facial expressions that resulted in emotional responses and had them draw out where they felt increased and decreased emotions in their body. Anger resulted in increased sensation in the chest for example, pride was most felt in the head region, while happiness was experienced throughout the entire body.

“Metaphorical medicine” may gain support as greater insight is offered as to what might be occurring physically when a person describes feeling “sick to their stomach” when feeling disgust or when a person suffering from chronic upper body pain relates that their spouse has been a “pain in their neck” recently.

The implications for creating such an Emotion and Body Atlas are huge and extremely relevant to those interested in somato-emotional techniques such as EFT aka the Emotional Freedom Techniques or tapping. In this technique a person is asked to think of an event or memory that caused them distress and then to indicate where they feel it in their body. This study reinforces and validates for individuals that undergo such interventions that there are universal correlates to where emotions are felt in their body. Hopefully future studies will go on to validate physiological correlating changes such as alterations in blood supply, hormonal fluctuations etc. that could further link ongoing dysfunctional emotional states with altered states of health and the possible susceptibility of pathological states.

Study authors Lauri Nummenmaaa, Enrico Glereana, Riitta Harib, and Jari K. Hietanend are to be commended on this important piece of research.